Wilmer Oliva is legally blind, so he’s allowed to take his service dog named Forte to any public spaces with him. The duo has gone shopping together many times before, but all it takes is one bad experience to change everything. When Oliva and Forte entered a Jimmy Jazz at the Hanes Mall in North Carolina, he soon faced discrimination because of his disability.

They told him to leave the store because of Forte, but later apologized and made their service animal rules clearer. Yet, when Oliva came back, the manager refused him again and got the police involved. Now, Oliva is suing.

Oliva first visited the shoe and clothing store in October 2020. When the store manager saw Forte, they told Oliva to leave. Oliva left without a fight, but he later contacted the Consumer Protection Division of the N.C. Department of Justice to let them know of the discrimination he faced.

After learning of the complaint, Jimmy Jazz reached out to Oliva and assured him that he could safely return to their store whenever he’d like. They also planned to post signs acknowledging that service animals are welcome in the store.

However, when Oliva returned about a month later, things got worse. The manager again told Oliva to leave, explaining that Forte wasn’t wearing a service dog vest. Forte had a harness with a big handle that said “The Seeing Eye” on it, but service dog vests are not required for service dogs to enter businesses. Oliva explained that to the manager and gave them information about service dog laws, but they still called security and the police.

Two members of the Hanes Mall security arrived when called, but they didn’t see any problems. They told the manager that Oliva and Forte are allowed in the store, but then, Winston-Salem police officers arrived with contrasting opinions.

Police Side with the Store

Oliva tried to explain the situation, and he offered the officers information on service dog laws. However, one officer reportedly told him that they weren’t interested in any materials about service dogs. They didn’t care that Forte was professionally trained by The Seeing Eye of Morristown, NJ.

“The police officers were concerned only with the store’s right to remove whomever they want for whatever reason because the store is private property,” the lawsuit states.

The officers told Oliva he had to leave the store or else he’d be arrested for trespassing. They told him he could either leave on his own or in handcuffs, so Oliva exited the store. Before he left, an officer told him he’d be charged with trespassing if he ever returned.

After Oliva left the store the second time, he filed a lawsuit against the city of Winston-Salem for violating the Americans with Disabilities Act and Rehabilitation Act. Those acts allow service dogs in all public spaces. So, Oliva says the store and police had no right to deny him. 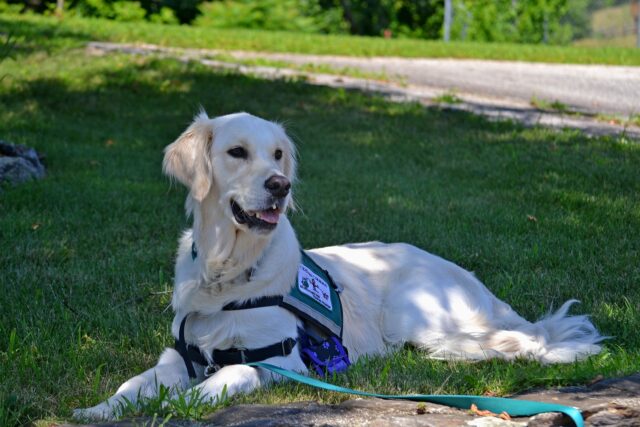 “Under these federal laws, the city is prohibited from limiting or interfering with service animal rights and is obligated to modify its policies, practices, and procedures to permit the use of service animals in public places,” the lawsuit says.

Oliva needs his service dog to help him get places easier, and he’s not the only one in this situation. This lawsuit is necessary to ensure that no one else has to face discrimination for having a trained service dog by their side.