We all love our dogs and many of us will do anything to make them more comfortable at home. Meet Sean Farrell who took it to another level for his best friend Sgt. Buster. This is their story!

Sean is a die-hard dog lover, and once you see what he’s done for his family at home, you’ll understand how much that affection runs deep. When Sean met Sgt. Buster, a Staffordshire Bull Terrier, he was just his foster dad. But the two hit it off and he understood he had to welcome the pup as a permanent member of his pack. 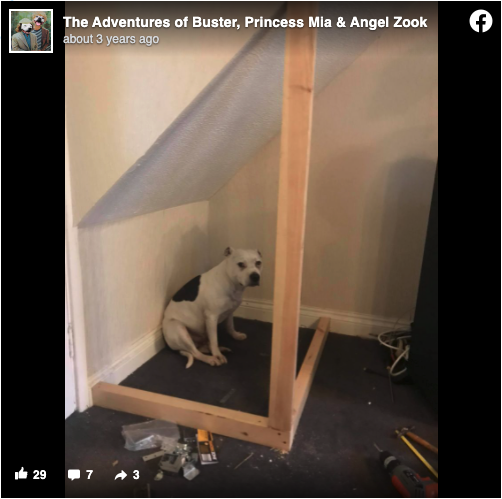 “I’ve had him just over 2 years,” Sean explained via InspireMore. “He’s not had the best life and that changed the day I met him. Initially, I was only supposed to foster him but I fell in love, and we [both] knew we were meant to be together.”

Buster, unfortunately, suffers from a number of anxieties and phobias that he acquired during his previous existence. Buster is particularly nervous around men other than Sean, has trust issues, and his anxiety spikes may be very trying for both the dog and family to relax.

Sean, on the other hand, will not give up hope on him and will go to any length to assist his new fur kid feel at ease. At home, Buster concealed himself in Sean’s bedroom, refusing to exit for anything except food. It was clear that he was afraid of his surroundings and required a tiny, secure place to hide away. His father came up with an excellent idea: he would create Buster his own little room.

“The boudoir was an idea to give Buster a cozy space of his own in the same room as me,” Sean said. “To really let him know he can be safe around me and feel secure in his little den at the same time. [After finishing it], he went in there almost instantly. It has been a few weeks now and he’s happy to sleep and hang out in his house.”

Sean, on the other hand, didn’t have much carpentry experience but was eager to learn. He did his homework online, bought $100 in materials, and got started. While he assembled the room, Sean posted updates to his Facebook page (which is, of course, dedicated to his dogs Zook and Sgt. Buster). Thousands of followers were attracted along the way; individuals all over the world admired what he was willing to do for his anxious little buddy! 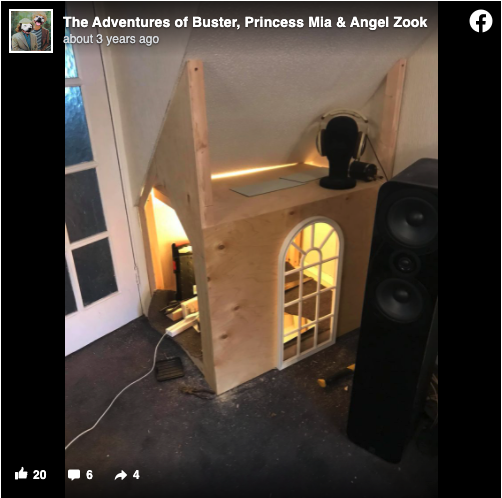 Since Buster’s bedroom would be part of the family living room, Sean wanted it to blend in with the decor. Even without experience, he was able to create an adorable and comfortable little home for his dog just using wood and plyboard.

A tiny window to keep an eye on what’s going on in the house around him, a relaxing fan, mood lighting, and a digital photo frame keep Buster occupied in his doggie bedroom. Even before Sean was finished constructing the room, Buster was eager to test it out! 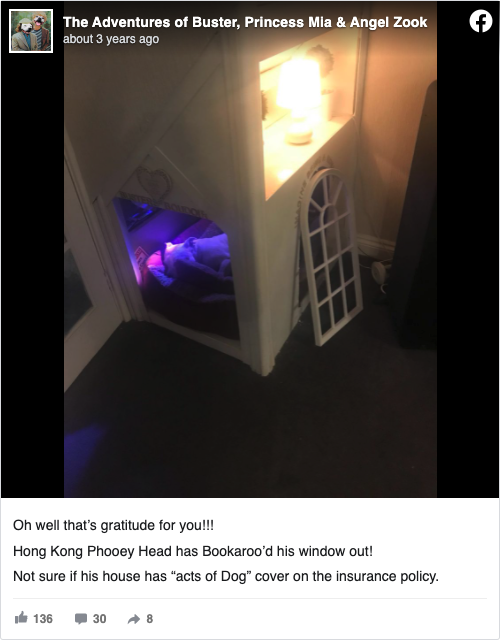 Buster is a very lucky dog, to say the least. He had severe anxiety problems and few people would adopt a rescue dog like him; let alone go above and beyond the call of duty to make him comfortable at home.