May is Mental Health Awareness Month, and dog lovers everywhere are taking this opportunity to spotlight the many benefits of pet ownership for our mental health.

The perks of owning a dog are too numerous to count. They protect our homes and families, show us unconditional love, and give the BEST snuggles. And now, a recent study performed by Dogs for Good (in conjunction with More Than Pet Insurance) proves that dog ownership can make a person happier as well. Dogs keep us active and connected with the world around us.

“We want to shine a spotlight on our relationship with dogs.” – James Loder of More Than Pet Insurance

This study began with a single driving belief: people who have a four-legged companion are overall happier than people who do not. The crew set out to prove this idea by bringing television presenter Lorraine Kelly on board, along with her beautiful pup, Angus.

“So we thought we’d do a wee experiment. I’m going to go out with Angus and see just how many people come and talk to us.” – Lorraine Kelly

Together, the pair would be tasked with performing a simple experiment. Kelly and Angus would go out for a walk together in a high-traffic area and see just how many people stopped to interact with the pair and to say hello.

The results of this experiment were rather impressive. During a short, routine walk, Kelly and Angus were stopped by brand new friends and neighbors wanting to say hello more than nine times. Some of these neighbors had dogs of their own, while others simply stopped to give Angus a quick pet and a kiss.

“My dog has been instrumental in improving my mental health, and just taking Angus out for a walk is great exercise. It helps me mentally, and it means I meet lots of people on our walks.” – Lorraine Kelly

This year, the focus of Mental Health Awareness Week (which runs from May 9th to the 16th) is on the topic of loneliness. Specifically, the significant impact that feeling lonely can have on our mental wellbeing.

In addition to performing the Lorraine Kelly experiment, Dogs for Good and their More Than partners also interviewed over 2,000 people to develop some rather rebarkable statistics.

This study showed that those who own a four-legged companion have more meaningful interactions than those who do not, by a whopping 69%.

Meaningful interactions are classified, in this instance, as meaningful one-on-ones that boost your overall mood. In addition, 31% of interviewees reported feeling less lonely when taking a stroll with their pets. “Dog ownership presents opportunities for social interactions that have long-term positive benefits on the lives of owners – both physically and mentally.” – James Loder

Dogs for Good, an organization dedicated to pairing a service dog with those with physical or mental disabilities, is using this partnership, since deemed the “Paws for a Smile” campaign, to highlight the benefits of dog ownership for those with disabilities.

81% of disabled dog owners attribute most of their social interactions and connections to their pups. This study proved conclusively that ​​dog owners with disabilities have four times as many meaningful conversations a month than disabled people without a pet. 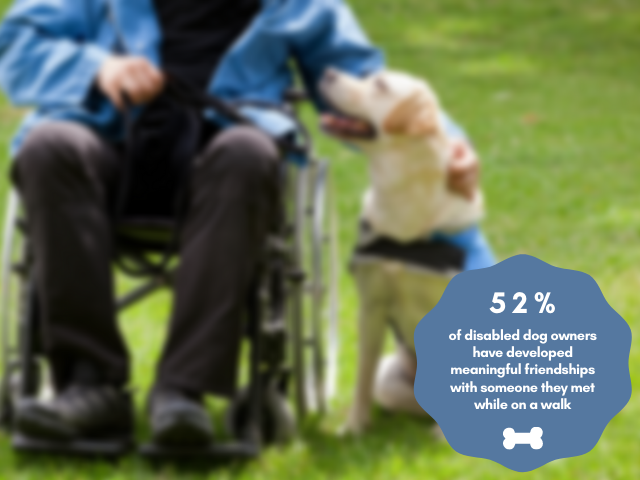 50% of non-dog owners said they rarely interact with new people at all.

James Loder of More Than Pet Insurance sums up this experiment by stating:

“Dog owners have more opportunities for social interaction, and our research shows we also make far more meaningful connections thanks to our four-legged friends.” – James Loder

The bottom line: owning a dog can significantly dissolve feelings of loneliness and make you happier.

Visit your local shelter today to bring home a four-legged companion of your own!