I was advised on February 27th, 2019 by your handler, Sergeant Frank Bowne, of damage that was caused to the weather stripping on the rear door of his patrol vehicle. It is my understanding that just after midnight on February 27th, 2019 as your handler was driving you home that he witnessed a vehicle being driven in an erratic manner. Sergeant Bowne made a traffic stop on that vehicle to check on the status of the driver. After finishing that traffic stop, Sergeant Bowne continued on and drove you home.

Once the two of you arrived at the residence Sergeant Bowne discovered the remnants of the door’s weather stripping. Quick investigation on his part showed teeth marks, drool patterns and paw prints on the door and the destroyed weather stripping. Based on this evidence, it is Sergeant Bowne’s suspicion that you caused the damage during the traffic stop. 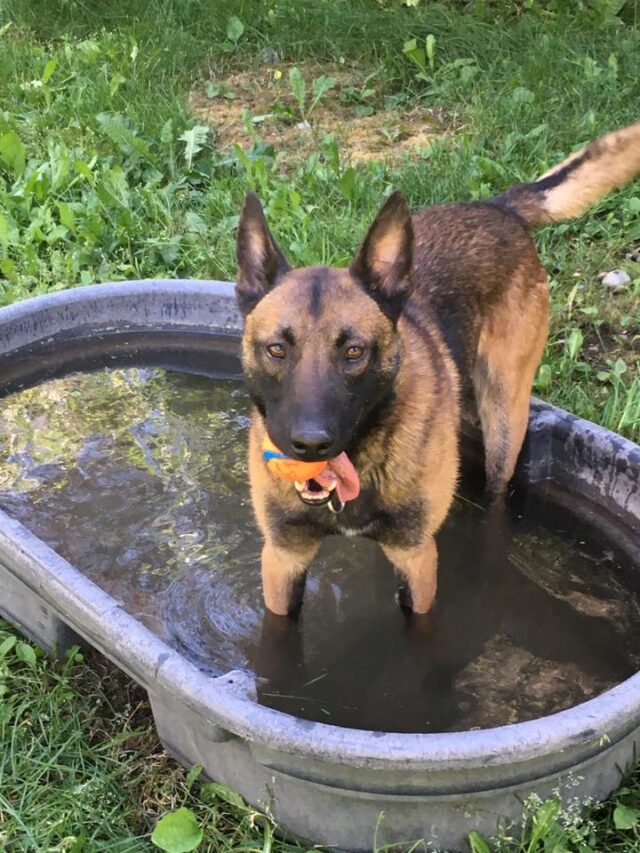 Duco, I understand that you are subjected to Sgt. Bowne’s horrible classic country music on a daily basis which must be ruff for you. It is pawsible that you were simply frustrated by an after-shift traffic stop when you just wanted to get home to your dinner. Regardless of the matter, this kind of damage in not acceptable, especially given the fact that you had previously chewed on the weather stripping and Sergeant Bowne thought he found a way to prevent you from getting to it again. It is unnecessary for you to try and prove that you are smarter than Sergeant Bowne….we already know this!

It was brought to my attention that Sergeant Bowne was gruff with you during your training day about the damage. I heard that he hounded you about it and said some hurtful things. Rest assured that, at this point, we will not be taking away your toys. We know that you are a good boy. However, I need to make sure you understand that any further incidents of this nature could result in further discipline up to and including neutering.

Duco wrote up a response of his own to Lieutenant Brantl after he received the reprimand:

Subject: ​Response to: Letter of Counselling damage to pawtrol vehicle​ ​

Due to the overwhelming response regarding my recent “Letter of Counseling”, I have asked my partner/handler to translate my words so I can address this issue directly.

I was selected as a Post Falls Police K9 because of my Drives, Character Traits and Work Ethic. These Drives, Character Traits and Work Ethic were well known to the Administrative staff of the department at the time of my initial employment and even encouraged as part of my duties. Part of those duties is “Partner/Handler Protection”. I am tested yearly in this particular discipline as well as others. I excel in these disciplines and have been rewarded numerous times because of my success.

During the early morning hours of February 27th 2019, my partner/handler conducted a traffic stop and left me inside the pawtrol car. Since I was not able to provide a visual deterrent to would be “Bad Guys” I felt it was my sworn duty to provide a deterrent nonetheless. I made a decision to be aggressive and vocal for all to be warned; “If you try to harm my partner/handler, this is what will happen to you!” I must reiterate, I have been rewarded numerous times for this successful tactic.

Now, I apologize that equipment was damaged, but as you are aware, it is and always has been a rule that, “Anything in my area of the pawtrol car is MINE!” Therefore, I submit that the weather stripping that had come undone and provided me access to it was nothing more than an EQUIPMENT FAILURE that could have injured me and became MINE as soon as it was accessible.

I hereby formally APPEAL this Letter of Counseling and advise Neutering will never occur.

We think Duco made his point! And a strong argument that the damage could only have been caused by equipment failure. Well done, Duco!