Lionel’s day took an unexpected turn when his trip to the grocery store turned into a rescue mission. After saving a stray pup from a busy street, Lionel soon realized that this rescued dog’s reality was genuinely heartbreaking.

Lionel Vytialingam was startled by the sound of car horns and chaos coming from the nearby road. After noticing the commotion was due to a stray dog weaving in and out of traffic, he knew he had to come to this poor pup’s aid.

“She had no idea what she was doing or where she was going. There were cars and bikes going along the street and she was walking right into them like she thought they were family.” – Lionel

Once Lionel made his way to the frightened dog, he stretched his arms out in hopes that the stray pup would accept his help. After flinching each time, the scruffy stray weaved her way through the traffic. Lionel was finally able to scoop her up and bring her to safety.

Once the sweet stray was safely sitting in Lionel’s car, he noticed a soggy note hanging from her collar. Though he initially hoped this note would lead to the lost dog’s owners, he soon discovered that this abandoned pup was on her own. Once he read the words that this sweet girl had carried, Lionel couldn’t contain his emotions. 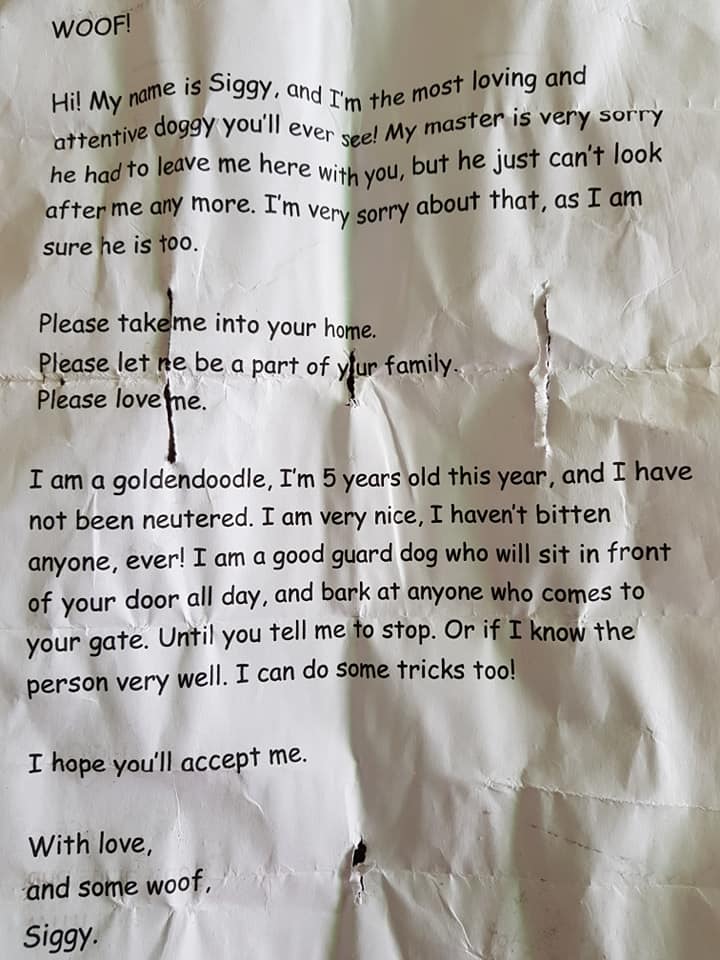 “I broke down in tears. Probably wasn’t a good sight for all the passing vehicles.” – Lionel

Once Lionel realized the terrible reality of the situation, he immediately brought the abandoned pup home and tried to comfort her in any way he could. He gave her a warm bath, a delicious meal, and cuddled her throughout the night to provide her with the love she deserved after such a hard day.

“When she’s with me, she’s calm. She just sits near or on me and either falls asleep or tries to get my attention by nibbling my fingers or yelping or tugging at my shirt.” – Lionel

Though Lionel would have loved to be the one to welcome Siggy into his home for good, Siggy did not get along well with his current dog, Sammo. Thankfully though, he found a way to keep her in his family.

Lionel’s brother will be welcoming Siggy into his home once the travels bans lift, and he’s able to make the trip. We are so thankful for Lionel and his dedication to Siggy, and his determination to turn this terrible situation into a happy ending for this deserving pup!

We’d like to remind everyone that abandoning your furry friend is never the right choice and that there are always rescues or shelters in your area that are willing to help.