There are times when we must make hard choices in life. In this narrative, a man had to choose between his house and his dog. Lewis Jiminez understands this lesson well because he had no choice but to return his best buddy, a Pit Bull named Titus, who he loved, back to the shelter where he was adopted. Lewis wasn’t giving up on Titus or turning his back on him. This isn’t about that at all! 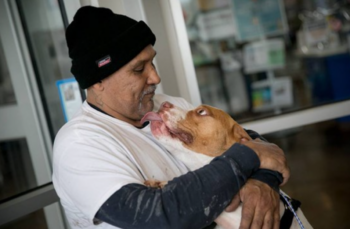 When Lewis saw Titus playing in the yard, leaping about, he fell for him immediately. He couldn’t help but be drawn to the dog’s cheerful and pleasant demeanor. For Lewis, Titus was family. “He’s like my big old kid,” said Lewis. But then something unthinkable occurred. Something that caused the pair to split up.

Lewis was told he couldn’t keep Titus. The management company of his building told Lewis he had to get rid of his Pit Bull or he would be evicted. Lewis had nowhere else to go! And he had no friends or family who could take care of Titus until he found a new place to live. Lewis became desperate. 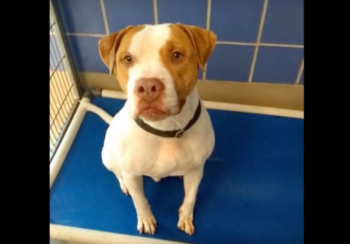 He had no choice but to bring Titus back to the shelter where he got him. This devastating decision broke Lewis’ heart. The shelter accepted Titus but they were pretty sure, like so many other people, that Lewis would drop Titus off and never return again. Technically the shelter doesn’t hold dogs because owners say they’ll be back all the time and don’t come back at all. But this time was different. Lewis was unlike any dog owner they had met before.

Once at the shelter, Titus had a rough time immediately. Adjusting to the shelter was impossible for him; he was used to being in a loving home without the chaos. Without the incessant barking. Without the cold, concrete floors.

Shelter life is incredibly hard and Titus was miserable. He sat in his kennel most of the time, feeling downright depressed. The only upside to his days was when he could come out and play. Then Titus would run around happily. He was grateful to be out of his ‘cell.’ Lewis came to visit often and Titus would perk up. He was thrilled to see his dad but then the visit would have to come to an end and both Lewis and Titus were devastated all over again. Lewis cried every single time! But this made him even more determined to get a new home so he could get Titus out.

Then the miracle they had both been waiting for happened. Lewis found a new house! It was perfect. It had a nice big yard for Titus to run around in! Lewis went to the shelter to pick up his ‘son’ and the reunion was PERFECT! The tears flowed and Titus knew his dad was there to pick him up for good. The emotional embrace (after embrace) that came next was captured on camera. 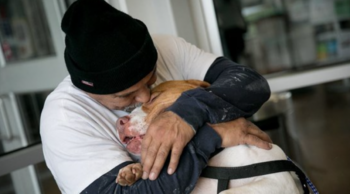 Titus has the sweetest smile on his face as Lewis gives him the biggest hug. The shelter shared the photo on their Facebook page and it went viral. Their reunion was so amazing that the whole world cheered! Lewis was so grateful to have his dog back. He also thanked the shelter workers over and over again for taking care of his baby; he knew that their kindness and love is what got Titus through the whole ordeal. The shelter workers knew deep down that Lewis was always coming back for Titus despite the other times they witnessed the opposite from other dog owners. The duo is living a happy life again, together. And we couldn’t be happier for them!