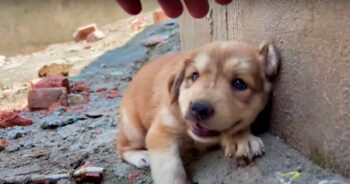 A tiny puppy had lost his mom when a natural disaster hit the area. He cried out in desperation. He wanted his mama so badly. Thankfully a group of kind people came to his aid. He didn’t want to be touched at first, unsure of what their hands could do. But he settled down quickly and one of the rescuers was able to pick him up.

The puppy was placed in a safe spot and given fresh water. He was so thirsty! A kind man then placed him in the basket of his scooter and brought him to their shelter. The little puppy found a dark spot in a corner to hide in and stayed there until he felt comfortable enough to come out. But once he did, he couldn’t wait to eat!

The pup was given some toys to play with after his meal. He fell in love with a ball so they gave him another one! What a good boy! The fluffy fella played like a champ! After playtime, it was time for a nap. The puppy slept peacefully. We are so relieved this little one was found in time. Aren’t you?

The post Orphaned Pup Would Rather Be Homeless Than Have Man Touch Him appeared first on iHeartDogs.com.