Heroes come in all sizes. Yes, that even includes tiny lap dogs. 61-year-old Susan Lee was walking her Jack Russell Terrier and Labradoodle in the town of Strafford, Vermont, when a black bear charged at her and attacked her. Lee thought those would be her final moments alive.

But it was her little Jack Russell Terrier who saved the day. If that dog hadn’t stood up to the vicious predator, Lee wouldn’t have escaped in one piece. In moments of life or death, our dogs can surprise us in ways we never expected.

During Lee’s walk, she heard a loud sound, so she called for her dogs to come back by her. Before she could investigate, a bear revealed itself and chased her. As Lee ran off, she tripped on a stone wall and fell to the ground.

“She then felt pain on her upper left leg and realized the bear was on top of her and had bitten her,” officials said.

As she was bitten, her Jack Russell Terrier appeared beside her and barked at the bear. The bear was so distracted by the dog’s barking that Lee was able to get up and escape without it noticing. Then, her brave Terrier ran behind her. She didn’t see the bear again after that.

Her Labradoodle returned home on his own, and a neighbor rushed Lee to the hospital. Lee called 911 on the way to explain the traumatic situation. She was shaken but grateful to have had her dog there to protect her.

Lee had a bite wound on her upper left leg and several scratches that were two to nine inches long. Her injuries were not life-threatening, so she was released from the hospital shortly after. The Jack Russell Terrier didn’t have any injuries, so Game Warden Sgt. Jeffrey Whipple joked that the pup must have used “ninja moves” to escape the bear’s claws.

Officials from the Vermont Fish and Wildlife Department learned that the bear was a mom who had cubs nearby. She likely felt threatened when she saw the dogs, so she gave Lee a “warning bite.” Officials warned Lee of the risk of rabies, and they took her clothes as evidence to test for rabies. They still haven’t found the bear, but they don’t believe an isolated incident is a concern for public safety. 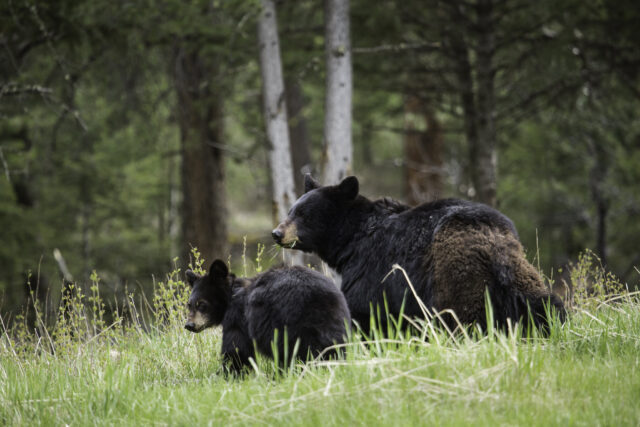 RELATED: Determined Dog Refuses To Back Down When Defending Family From Mountain Lion

“Bear attacks are extremely rare in Vermont,” Vermont Fish and Wildlife Department Bear Biologist Jaclyn Comeau said. “However, at this time of year black bears are moving in family units and mothers will be protective of their cubs. If confronted by a bear it is essential to remain calm and back away slowly, and to fight back immediately if attacked.”

There are about 6,000 black bears in Vermont. They’re normally shy creatures that avoid people, so this was only the state’s fourth recorded attack. It’s not something Lee could’ve ever expected to face, but she was lucky to have her loyal companion by her side.