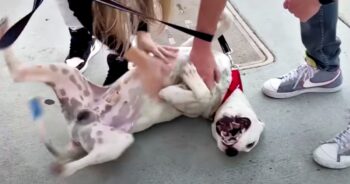 A dog named Charlie was abandoned in California. He lived on the streets where his health quickly declined. By the time a woman rescued him, the poor boy was totally emaciated and his skin was a mess. Yet, Charlie beamed. The dog was surely grateful.

Despite all Charlie had been through, he greeted his new human friends with tail wags and lots of kisses. Amazingly, Charlie remained unscathed by his past. He didn’t allow his former life define him. The woman who rescued Charlie found a vet willing to treat him. And Charlie, who stayed there for several weeks, healed quickly.

Charlie loved everyone he met but his heart held a special place for his future dad. He knew there was a person out there he belonged with. A man, named Jay, heard about Charlie and knew instantly that Charlie was his son! He couldn’t wait to bring Charlie home. Once the vet cleared Charlie, Jay went to pick him up.

The Pittie’s reaction to his adoption day is too incredible to miss. His happiness is off the charts! Now Charlie spends his days being spoiled and loved. YAY for Charlie!

The post Unlucky Dog Celebrates His Excitement When He Hears He Has A New Dad appeared first on iHeartDogs.com.