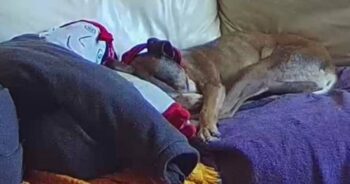 There’s nothing dogs with separation anxiety hate more than when their humans go to work. Left alone at home, they may cry, pace, and even destroy furniture.

In July of 2022, Debbie Morley’s neighbor informed her that her dog had been howling constantly while she was gone. Not only did Morley feel guilty about the noise, but it also hurt to know her poor dog Shannow spent the whole day pining for her.

How To Leave Home Without Really Leaving

After learning about Shannow’s separation anxiety, Morley bought a camera for her living room. In a Facebook post, she wrote:

“Yesterday Shannow howled for eight hours and two of the other dogs were joining in with the singing on and off. The anxious dog (Shannow) did not sleep all day.”

Obviously, Morley couldn’t stay home from work just for Shannow’s sake. But in a way, she figured out, she actually could.

“So I made dummy-me out of old clothes last night as a friend for when I’m out,” the post continues. “This morning, after I walked the dogs I rubbed my sweaty hoodie on it, gave it a squirt of my regular perfume, positioned it on the sofa in my lazy tv watching & snoozing pose and left.”

Here’s an image of that dummy, drawn-on face and all (the Daryl Dixon cut-out isn’t part of it, by the way. That threw me too):

Turns Out It Works!

This time when Morley watched the security camera footage, she was relieved. The dummy version of herself really did calm the dogs in her absence.

“They howled for less than five mins, went to sleep with the dummy, woke up when the neighbour’s children went out to school an hour later and had another little howl. After that Shannow has snuggled up with the fake me all day and slept mostly, no signs of anxiety and all the other have done the same!”

Morley’s post about her body double solution has thousands of likes and shares, and commenters were impressed with this elegantly simple solution to Shannow’s howling.

“That’s amazing that worked so well. I’ve used the heartbeat stuffed animals for puppies and kittens with separation anxiety but never thought something like this would work for adult dogs.” – Nicole Ochacki via Facebook

“Brilliant idea, I love it, and would certainly recommend any trying it if their dog also suffers separation anxiety too.” – Vivien Eales via Facebook

The post Woman Makes A “Body Double” For Her Heart-Sick Dog appeared first on iHeartDogs.com.