Ever wish you could confront the people that were responsible for causing the love of your life, your dog’s, misery?Thersea Strader founded the National Mill Dog Rescue in 2007 in honor of her Italian Greyhound Lily – who was a poster child for the abuse and neglect puppy mill dogs experience.

Lily had spent the first seven years of her life as a breeding dog.

“Lily spent all of her days confined to a small, cold wire cage in a dark, foul-smelling barn. Never was she removed from her cage for exercise or socialization. In her dreary confines, Lily was forced to produce one litter after another with no respite. Like all commercial breeding dogs, she was a veritable breeding machine whose worth was measured in only one way – her ability to produce puppies.

By seven years of age, Lily was worn out. Commonplace in the industry, she had received little to no veterinary care throughout her life, the result of which, for her, was terribly disturbing. Due to years of no dental care, poor quality food, rabbit bottle watering and no appropriate chew toys, the roof of Lily’s mouth and lower jaw, had rotted away. Her chest was riddled with mammary tumors and she was absolutely terrified of people.”

The Strader family provided Lily with the love, compassion, and veterinary treatment she so desperately needed.

In May 2008, Lily passed away at home, in the arms of her loving adoptive father and family. Just fifteen months after her rescue.

While trying to deal with Lily’s passing, Thersea wrote the following potent letter. And while it’s addressed to Lily’s breeder, we hope it will strike a note with anyone involved in the breeding or selling of dogs in mills.

It’s been fifteen months since you and I first met. More than likely, you remember very little about me. After all, we met in your world, on your property in fact. Since that day, elements of your world have become a very big part of mine. For that, myself and many like-minded people are very thankful to you.

In February 2007, I received an email – “50 Italian Greyhounds in need” and with that, a phone number. Having had a lifetime affinity for the breed, I called the number to find out what the story was and how I might be able to help. I’m certain you know where this letter is going now. 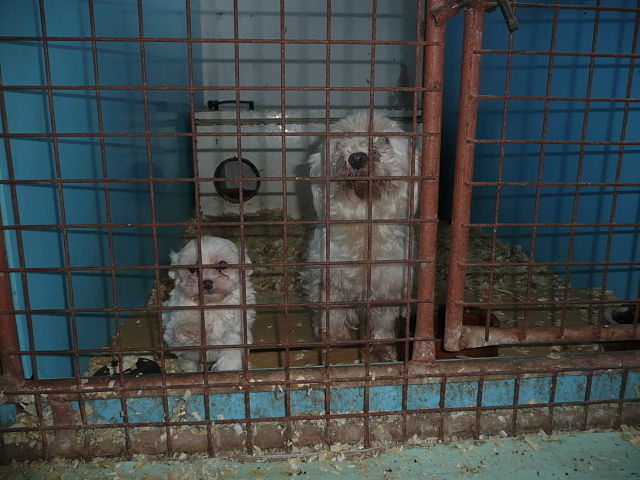 Yes, February 17, 2007, after 40+ years, your kennel would be going out of business. Time to retire and relax after four decades of mistreating dogs. Five hundred and sixty one dogs would head to the auction blocks that day, 49 were Italian Greyhounds. It was without question that I would help, though I must admit, I had no idea what I would come to learn through the process. Due to transportation issues, I realized that if I were to be of any use to these dogs, I would have to drive out to Lamar myself. So, on the 16th of February, my daughter and I headed to Missouri.

Understand, I’ve been involved in dog rescue essentially my entire life – fostering and placing homeless dogs, caring for sick or injured dogs, assisting overpopulated shelters, etc. I have always known about puppy mills and pet store puppies but have never shared my home with anything other than rescued animals. For the record, I AM NOT AN ANIMAL RIGHTS ACTIVIST. What I am is a person who believes in the right to humane treatment for all living things.

Martha, what I witnessed on your property was far from humane. Hundreds of terrified ailing faces, imprisoned in their wire confines, some staring at me, but most too fearful to look into my eyes, so unsure of how to interpret human contact. That experience has caused me countless sleepless nights and to this very day, the sadness and the fear in their eyes haunts my very being.

I am completely aware that you were operating well within USDA standards – what a despicable thought that is. I am also aware that in your circles, commercial breeding dogs are considered livestock. Dogs are not livestock, Martha. Thousands of years ago, man domesticated dogs to be our protectors, hunters, herders, guardians, but most of all, our companions.

I came home with thirteen of your dogs – nine Italian Greyhounds, two Dachshunds and two Papillons. Not a single dog that I had cared for in over 25 years of rescue work came anywhere close to the physical and emotional damage that your dogs had suffered. As it related to rescuing dogs, the next several months would become the education of a lifetime for me.

The entire purpose of this letter though, is about just one of those dogs, the one who would find her forever home here with my family….. #251 – AKC registered “Reedgate’s Swift Motion”. Oh, the irony of her name – Swift Motion – an Italian Greyhound who was never able to run. Caging her for her entire life stripped her of ever having enough strength in her legs to experience the joy of running. A cruel reality for a breed built to run.

In our home, we cut the chain from her neck, replaced it with a soft collar and named her Lily. At the age of seven years and one month Lily had been set free.

Lily was one of several of your dogs that was missing her lower jaw. I wonder how you might explain why so many of your dogs were suffering from this condition. I wonder if you were ever concerned about their pain or perhaps about how they were able to eat enough to stay alive. I wonder how many died in your care from the results of this condition. I wonder if you even noticed. I’m very certain you did notice one thing beyond the rotting faces though – their ability to produce puppies. That’s what your business is all about – producing puppies, at any expense. 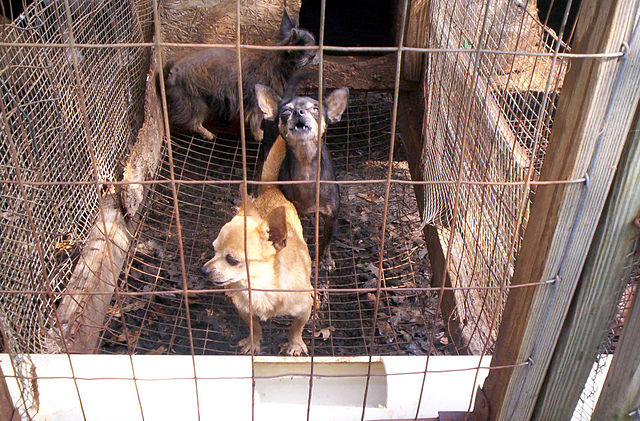 Lily became an absolute treasure in our home. Despite her many health issues and her extreme fear, in time, with lots of love and care, she found her courage and when she did, no one was immune to her love. Men, women and children brought to tears to hear her story and to have the untold pleasure of meeting her. Lily’s life was no longer about what she could do for you but instead, how we could make it up to her in a warm and loving home.

It was agonizing for our family to watch her suffer through four surgeries to remove mammary tumors, to attempt to repair her decaying face and to spay her — removing the papery black, pus filled organ that was once her uterus. How selfish of you never to see her pain, just the dollars.

Directly because of your gross neglect, every meal Lily ate was a struggle. We tried so many foods and so many different ways to make it easier for her to eat. But in the end, she had to do it her way, the way she learned at your place, the way she kept herself alive for you – picking kibbles out of her bowl, a few at a time with her feet, spreading them around the floor, then rubbing the “good” side of her face along the floor to catch a kibble on her tongue, then extending her neck upwards and swallowing it whole. Think about that, Martha. How would you like to eat just one meal that way?

Do you remember sitting in my car when the auction was over? The guys were gathering up the dogs that I had “won”. You said to me, “I just love my Italian Greyhounds”. Oh, the thoughts that went through my mind when those words came out of your mouth. You don’t love any dogs, Martha. What you did was spend more than forty years of your God given life using dogs for your personal gain. No regard to their physical or mental well-being, just cashing in on their ability to reproduce. Think about the thousands of dogs that passed through your hands – you robbed every single one of them of the simple joys they so deserve. A good meal, a warm and comfortable place to sleep, medical attention, and most of all, a human companion to make their lives whole.

Lily learned so much in our home – about being a family member, being a dog, being worthy. I will always be bothered that she never learned how to run or really how to play. But she learned how to love and be loved and for that, there are no words. She changed our lives forever.

Lily died on May 13, 2008 at the age of eight – about half the life expectancy for an Italian Greyhound. Martha, she died as a direct result of the neglect she suffered for seven years in your care. How many others have suffered the same fate?

This industry has been hidden far too long. The word is out, the days are numbered. People like you will soon venture out into fields of honest work and leave the care of God’s creatures to those of us who truly love them.